Tonight when I opened my e-mails I got a pleasant surprise.  There was an e-mail from the race organiser of this Saturday's Pumlumon Challenge, race 10 of the Runfurther Ultra-Running UK Championship Series, which included a list of the runners entered.  In total there are 60 entries.  However, it was not the number of entries that got me excited, it was the quality of the entries.  A quick look at the names listed indicates that this Saturday's race could well be the strongest quality field of Ultra Trail runners assembled this year!  So tonight's post will look at who is entered in relation to the current Runfurther Ultra-Running UK Championship Series Leader Board after 9 of the 12 series races.

The image below shows the top part of the current Leader Board. 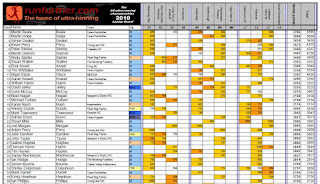 Clicking http://www.runfurther.com/media/2010Results/Overall_Results_9_2010c.pdf will open the Runfurther webpage showing the entire current Leader Board after 9 races.

At the moment Martin Beale is leading the series by 91 points from Martin Indge, with Simon Deakin, long time series leader, (who led the series from after two races, then he lost the lead to Wendy Dodds for two races, regained the lead after five races before losing the lead to Martin Beale after eight races), being a further 56 points behind.  However, if you look at the Leader Board (see image below), only taking into account series points based on runner's best THREE results not four, assuming that most runners will compete in at least one of the last three races, then the Leader Board order changes quite dramatically. 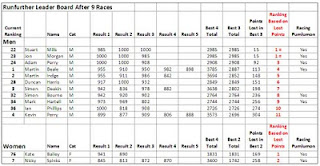 Now there is an exact tie for first place between Jon Morgan and myself, with Adam Perry in third place 77 points behind the two of us.  Based on this ranking Martin Beale drops from first down to fourth, being a further 21 points behind.  Looking at the points scored in the various races, all three leading runners have each won two races, with Jon Morgan winning Long Tour of Bradwell and Calderdale, Adam Perry winning Wuthering Hike and Osmotherley Phoenix, and with my winning of the Hardmoors 55 and Lakeland 100 races.
And finally looking at the last column, you will see what all the fuss is about.  Six out of the top ranked 11 runners, in fact six out of the top nine men runners are racing the Pumlumon Challenge!  What a race to look forward to!!!  And just to add to the occasion, it looks like it should be a showdown between the current womens leader Nicky Spinks, and Kate Bailey.  Kate, who although way down with a ranking of 76 has only competed in two races, but based on points lost in two races, (assuming she will compete in four races), is ranked 1st, being 89 points ahead of Nicky.

So what will the results of this weekend's race look like, and how will the Leader Board change?  Well as I have mentioned in a number of my previous posts, both during my race preparation and during the actual race, I try to focus on what I can do and do not pay much attention to what others can do.  However seeing the names on the entry list and knowing the results from the series races I am well aware of the accomplishments of some of the other runners, so it is a bit difficult to ignore the fact that there are some top class runners racing, in addition to names of runners I am unfamiliar with.  Many of the other highlighted runners have raced each other already this year, but for me, this will be the first time I have raced any of the leading contenders either this year or last year (apart from Adam Perry who started the Lakeland 100 however he withdrew during the race).  It should be a great occasion, an opportunity to see how my preparation and performance directly ranks against the other runners present.  One against one, in person, on the ultra trail, as opposed to simply on the Leader Board table.  It doesn't get any better!

With only four days to go, it's now not too long to wait!  As you may have gathered I am really looking forward to the race, but I am also looking forward to the chance to chat to many of the runners before and after the race.  I will hopefully have the opportunity to thank Nick Ham in person for his helpful 2009 Pumlumon Challenge race report that I used for my recce, and hopefully I will also be able to chat to Dick Scroop about his experiences in completing all nine races of this year's series, with both of these runners entered.  To the other 57 runners I'll see you all on Saturday.  Lets hope the conditions are like last Saturday, and not the rain and mist of my recce run three weeks earlier!

Time to sign off with a few words on running.  "Although Ultra Trail Running is extremely enjoyable, with the challenges, the competition and the scenery, it is being part of the Ultra Trail Running Community, with the over abundance of positivity and friendship, that provides the total enjoyment." Stuart Mills, 2010.

To those of you running on Saturday, may you all have an enjoyable experience.

Stuart
Posted by UltraStu at 01:10