Plans for 2011 - How to Adjust My Self Expectations?

Well after a bit of time giving various races some thought I have decided upon my key races for the year.  Having moved up to 100 mile races in 2009 and 2010, the intention was to race another 100 mile event in 2011.  Which event though?  A new race, or a repeat run?  Ultra Trail Mont Blanc in 2009 was absolutely amazing.  Lakeland 100 in 2010 was equally impressive, a great course and superbly organised.  In the end I have decided to head out to Chamonix again at the end of August.

Some of you may be thinking, why not just do both!  I know there are a few out there that have entries for both, (entries now closed for both races), however, for me, I am such a 'wreck' after racing 100 miles that I know there would be no way that I could complete both events, being only four weeks apart.

So with the number one focus for the year decided upon, the number two focus was easy: The Montane Highland Fling, at the end of April.  I last ran 'The Fling' back in 2009, and somehow managed to run off-course.  So there is a bit of 'unfinished business' for me to put right this year.  The remainder of the year consists of a marathon or two for a bit of 'speed work', with the Endurance Life Sussex edition of the Coastal Trail Series being targeted.  Ideal, as the start is only 10 miles away from where I live.  I'll probably 'throw in' one or two other races from the Runfurther Ultra Series during the year, and then my local Beachy Head Marathon at the end of October, to run for my 10th time, to finish the year off with.

Thanks for the comments following my review of 2010 post.  I took a look at Anton Krupicka's blog.  There I was, pretty pleased with myself at running 2276 miles during 2010, and then I see that this chap ran 6285 miles!  But I am still pleased with myself.  As previously mentioned I am not truly convinced that running more miles will simply lead to improved performance in ultra trail racing.  Yes, it will result in that you will be able to race more than one 100 miler a year.  However, for a one-off 100miler each year, what benefits will it give me in response to the increased time commitment?

Yes, one of the reasons that I run only around 2000 miles per year is due to the time involved.  I am fortunate that I have other more important things in my life than ultra trail running.  I have a wife and two young boys, hence why the two mornings I get up earliest each week, are Saturday and Sunday, in order that my running doesn't 'eat into' too much of the weekend.  The other reason, is simply that I am just a lazy trainer.  I always have been!  I guess it is largely due that for me, the result of the race is not the sole purpose why I run.  Yes I love the competition, and I enjoy achieving good results in races, but it doesn't mean 'everything' to me, so I find I don't really have that 'win at all costs' approach to my training.

However, coming onto 2011, having noticed that my performances have been pretty well 'stagnant' for the last three years, I feel that now is the time to re-adjust my self expectations, and raise them up a 'notch or two'!  The only problem is that in order to deep down believe in the heightened self expectations, you have to have some evidence, some substance to justify the expected improvement.  So this then gets back to training.  What do I need to do to provide that evidence?

Well luckily I don't think increasing my mileage substantially is necessary.  Good, no need to invest loads more time!  But what then?  Well to answer this question I have recently been going through my splits for last July's Lakeland 100 race, and my splits for my recce run. Within my Lakeland 100 race report titled "Lakeland 100 - The Importance of Preparation - Developing Positivity and Self Belief" I commented on how I felt my pace slowed drastically during the last 6 legs of the race.  Well looking at my leg split times for the race and for my recce run, it really did confirm this.  Take a look at the table below. 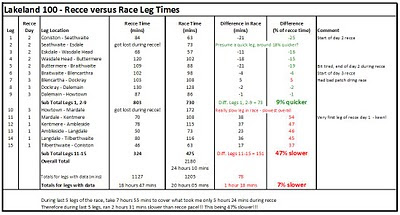 I ran my recce run on three consecutive days back in May.  Apart from the first leg on day one, which was actually leg 11 of the race, I ran at a pretty comfortable relaxed pace throughout.  I therefore thought it would be useful to compare race split times to this comfortable training pace.  Some interesting observations appear.

Probably the key aspect, which still amazes me, is just how slow I ran the last six legs, although due to getting lost on leg 10 of my recce I don't actually have any comparative data for this leg.  Although I know that leg 10 was my 'worst', slowest leg of the entire race!  The real question is why did I slow so much?  I know many of you will probably be thinking it is due to my stupid fast start, and I really do need to change my blog title to UltraStupid!  However, I have total belief that my "Run as fast as you can, while you can" philosophy works more me.  I expect I would have slowed the same amount for the last six legs even it I had started slower.  Only difference would be that I would then have two or three other runners running beside me!

So, why did I slow down?  Those of you that have read my post from last May titled "What Determines Performance in Ultra Running? - Part Two" will know that I belief ultra trail running performance is all about "the ability to remain within a 'positive state of being, a positive state of mind', while all of the many negative states from various sources are being initiated."  Looking at my list of potential negative sources, I seemed to have missed one.  Well I'm not really sure if it is actually a negative source.  It is as if the 'mind' gets fatigued.  I try not to separate the mind and body, as they are all one.  But sometimes it makes it easier for understanding the process.  Reflecting deeply on the Lakeland 100 race, it was as if the mind was no longer able to maintain that 'Within the now focus', where you are creating the impulse to run fast, to run just out and beyond your 'comfort zone'.  It is as if the mind has decided that after so many hours of race focus, it has had enough.  I am confident that it is not as simple as physical fatigue.  I wasn't short of fuel, my intensity was so low I wouldn't have been utilising much carbohydrate.  I wasn't dehydrated.  Yes I had severe muscle damage, which I think does play a major role in determining just how long the 'mind' can continue at 'race focus'.  So yes, physical fatigue does play its part.

So the secret is to develop 'race focus' endurance.  So this will be my new strategy with my training for 2011, to provide the required evidence, to provide substance for my, to be adjusted, raised self expectations.  How exactly do I develop 'race focus' endurance?  Not by drastically increasing my miles.  What I think the key is, is to increase the intensity on some of my long 20+ mile runs.  To put the mind under stress, so it has to work hard to run just out and beyond its comfort zone.  One method may also be the use of multiple consecutive long runs, to really work on the mind endurance.  Although it is really important that negative states don't develop by over extending the mind into too much 'discomfort'.

As 2011 begins, I am therefore excited and optimistic about my new thoughts on training for ultra trail running, with a planned few tweaks to my training.  The majority of my training will stay the same, with focus on rhythm and relaxation, to continue to develop the positivity and running economy, which are always capable of continued improvement!

I hope you have managed to work your way through my at times rather random thoughts.  I'm still in the process of trying to work it all out!

Time to sign off:  "One of the real 'magics' of ultra trail running is that the secret to performance, is just that, a secret!  The joy one can receive, is in the continued ambition and execution to discover aspects of the 'secret', with the knowing that there will always be more to discover."  Stuart Mills, 2011

Stuart
PS  To those readers out there who live in the United States please take a look at this website:

The Fresh Air Fund is looking for runners and sponsors to join the Fresh Air Fund-Racers team for the NYC Half-Marathon this coming March 20th.  It looks a worthy charity, so please give it a look.  Thanks, Stuart
Posted by UltraStu at 00:47 1 comment: