A Few Bits and Pieces

Due to finding myself pretty busy recently, I haven't really had time to put my thoughts together into writing a blog post on the process one can take when structuring a training programme.  The reason I mention this now, is due to the process I have been going through whilst constructing training programmes for a number of the athletes I am coaching.  You may recall a few blog posts back I mentioned that I had started doing on-line coaching.  Well it has been going really well.  I am now coaching ten athletes towards various goals, mostly ultra trail running goals, although a few of the runners have as their target race the London or Brighton road marathon.  So I'm finding it a good challenge, personalising each of their training programmes to accommodate their race goals, as well as addressing those aspects that appear to be currently holding them back.

All races start and finish at Chiddingly, East Sussex, and are 85% - 90% off-road, traveling along two long distance footpaths, the Wealdway and the Vanguard Way. The terrain is varied, and quite undulating, with the Ultra Trail and Marathon races taking in the spectacular Ashdown Forest. Visit the race website http://www.trailrunningsussex.co.uk/trailraces.html to enter online, and to find further information on these exciting new trail races. Entries opened only a few days ago, and it looks like the races could be popular with entries coming in already.

I also have some exciting news regarding my racing next year.  Yes, next year I will be racing as part of the newly formed TORQ Performance Trail Running Team.  I am joining British trail runner Tracey Dean, in addition to a few other trail runners on the team, but I don't think they have been officially announced yet.  I understand that there will be an official launch of the team at the start of 2014.  But here is the news item on the TORQ website announcing my 'signing' to the team.  Sounds a bit like a Premier League club making a new signing.  Pity I don't get a huge weekly salary like the overpaid football superstars. Actually a pity I don't get paid anything!  Just the 'glory', friendship and support of being part of the team.

Although it is exciting to look to next year's races, I haven't quite finished my 2013 racing season.  Yes, this Saturday I am racing the Beachy Head Trail Marathon for the 12th consecutive year.  I have mentioned many times on my blog, just how good this race is, hence why I have already raced it eleven times previously.  Last year's race didn't quite result in the performance I was hoping for, so I have increased the level of non-physical training this year, to ensure my mind is in the right place come race day.

Although the extent at which 'getting the mind right' influences ones race performance isn't as great in a trail marathon as it is in say a 100 mile ultra trail race, the mind still plays a huge part in determining trail marathon performance.  I often receive comments to my blog highlighting that I perhaps place too much emphasis on the non-physical, i.e. the mental training.  It was therefore nice to hear Scott Jurek's comments in an excellent brief interview that was conducted by Ben Abdelnoor.  Here is a link to the interview. 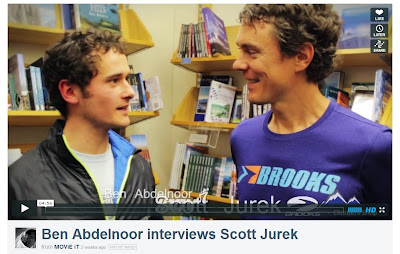 Time to sign off with the words from ultra trail legend Scott Jurek:


"In ultras it's really more about the mental component than anything else"  Scott Jurek, 2013,speaking in the Lake District

All the best with your physical and non-physical training, and yes with your racing,

Stuart
Posted by UltraStu at 20:55