Hi to everyone out there,

Thanks to all of you that commented on my last post. I received a mixture of responses, which is great to see. Giving me satisfaction in that my 'mutterings' are perhaps providing a catalyst for people to question what they do with regards to ultra running.
One of my friends suggested that I rename by blog from UltraStu to UltraStupid! I particularly liked his response, and Peter Duggan's response "I'm ..... predicting mass self destruction if everyone else starts off running 'as fast as they can while they can'! I also enjoyed. But what I found most interesting is the website link that Richie posted http://www.ultralegends.com/the-tipton-100-miles/
Thanks for the link Richie, it was great reading.
For those of you that didn't follow the link it was about Ultra Runner Cavin Woodward, from Leamington Cycling and Athletic Club, setting the World record for 100miles on the track in 1975. What was so amazing about Cavin Woodward was his approach to pacing ultra events, very similar to my thoughts expressed in my last post:
"Run as fast as you can, while you can!" and "... no matter what pace you run at, ... , after 5 hours of running you feel tired." Stuart Mills, 2010.
Well compare this to Cavin Woodward, 1975 - World Record Holder 100 miles - 1975-1977.
The article quotes his strategy as "... to go off as fast as he could for as long as he could." With Cavin quoted as saying "No matter what pace you start at, you will slow eventually, so start at a fast pace ..." Cavin Woodward, 1975.
It is great to see that the approach I proposed in my last post led to a World Record in 1975. What was so interesting about the article is that it also listed the 10 mile split times for not only Woodward's world record in 1975, but also Don Ritchie's world record in 1977, which stood for 25 years until Oleg Kharitinov broke the record in 2002. (http://www.americanultra.org/news/2002news/23oct02b.html
(And Kouros running 100 miles on the road in 1984) 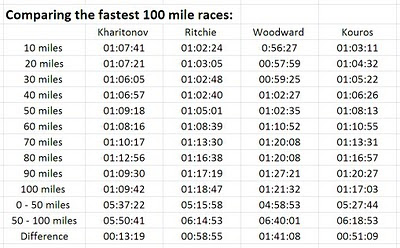 The absolutely amazing thing is that Kharitinov and Woodward used completely opposite extremes in terms of pace judgement. Clearly illustrated by the difference in running the first and second 50 km split times, being 1 hour 41 mins slower for Woodward, compared to only 13 minutes slower for Kharitinov!


The main conclusion I draw from these articles is that there is NO "one correct way" to run ultras. As much as science tries to provide the one answer, one answer does NOT exist, and whoever tries to tell you that "this is how things should be done" needs to be referred to the history of the 100 mile world record, especially to Cavin Woodward.

Sadly Cavin recently died in February this year. Upon reading about his approach to racing I was so inspired that I wanted to chat to him. I had loads of questions to ask him ... did he try even paced racing? what did he consider to cause him to slow down? what fuel did he use? etc. etc. One can learn so much from others, as well as from oneself.

So should I rename my blog UltraStupid? I now have evidence to support my ideas. So no way, the name UltraStu stays. How can setting a world record be stupid?

I am truly inspired by what I have read, so please look out for me in my next Ultra. To try to honour Cavin Woodward, on how he did things his way, not following the norm, my aim is to run the first mile in the same time as he ran the first mile of his world record - 5 minutes and 19 seconds. Lets hope it's a downhill start!

To all of you reading my 'mutterings', whatever your approach is at the start of your next Ultra, my signing off quote is from Steve Black - coach, motivator, counsellor and friend to rugby great Jonny Wilkinson.

"You've got to believe in what it is you are trying to achieve. Without that belief you've little chance of accomplishing anything of worth." Steve Black, 2008. Page 29: Jonny Wilkinson, Tackling Life - Striving for Perfection. Headline Publishing: London.


Enjoy, as you achieve.


PS. I have finally got around to downloading the photos that my family took of me as I ran the Hardmoors55. Take a look at the two photos below. They really illustrate the tough conditions. 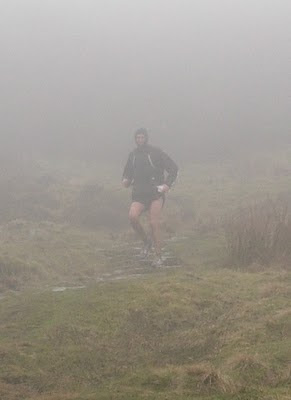 Running out of the mist! 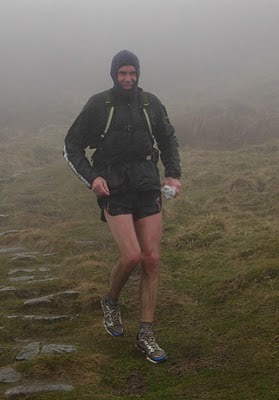 Wearing a balaclava for the first time ever in a race. But still all smiles!!!!!!!!!!