The Importance of Running Economy

Hi to those of you following my Memories and Mutterings.
At the moment my posts have consisted mainly of mutterings. This post was to be on my first ever marathon 30 years ago, but this can wait. I would like to expand upon some of the points I raised in my last post.
Thanks to those of you that have left comments. It is great to see that my posts are being read and are initiating thoughts. Rather than replying directly to your comments, I will take them on board and then respond to them in following posts. It may take a few posts until I respond to your comment, however, please be patient, your comment hasn't been ignored, rather I would like to fit it into the theme of a future post.
Having run for 32+ years I have many views on running that I would like to share. The problem is deciding upon what to share first. I raised two issues within my last post; (i) the need to have a strong belief in your preparation/ability, and (ii) the importance of the total mileage you have run ever. It is the second issue that I will expand upon tonight.
Although I stated within one of my earlier posts that my comments will be simply my views without the need to provide evidence/the need to reference the source of what I say. At times it is useful to support what I write with evidence. The Cavin Woodward 100 mile world record was a perfect example, to illustrate that I don't 'talk rubbish!'
After all, why should you the readers of my blog value what I write? Sure, I have won a few ultras (6 out of the 9 I have run in the last two years to be precise!), but simply getting across the line first doesn't mean I talk sense. I guess the reason why I think I talk sense is a combination of what I have learnt over 3o years of endurance running (2 years of ultra running) and from my job as a sports science lecturer, where along with other things I get paid to read, evaluate and then present to students the most recent findings from the sports science research.
Which of these two has been more beneficial? Without doubt, what I have discovered from my own self research conducted through my training and racing. It is the methods of enquiry, the ability to critique, to interpret the literature that is most important, what I have learnt most from being a lecturer. Not so much in terms of what the actual research states. A key warning when it comes to scientific evidence, just because it has been published doesn't automatically mean it is correct!!! There is plenty of rubbish that has been published, hence the need to be able to critique. Sorry, I have got a bit side tracked there.
Back to the importance of the total mileage you have run ever, in this particular case, supported by some published evidence!
Many publications will state something like the following:
"Endurance running performance depends on a complex interplay of factors, including: (1) a high maximal oxygen uptake (VO2 max), (2) the ability to sustain a high percentage of VO2 max for long periods of time (fractional utilisation of VO2 max, or lactate threshold), and (3) the ability to move efficiently (i.e., cost of running, or RUNNING ECONOMY." Lucia, A. et al (2008) p172. 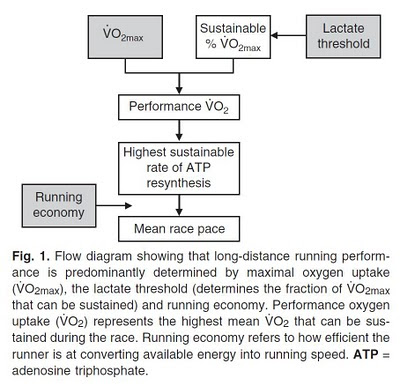 The image above illustrates how these three factors influence performance. However, what about ultra running performance? Well I believe that it is the running economy that is most important for ultra running. If I look at the data from some of my ultra races, my average heart rate during the following races are: Hardmoors55, duration 8 hours 59 mins = 138bpm, Ultra Trail Mont Blanc, 13 hours duration before battery ran out = 136bpm, Classic Cliffs57, duration 11 hours 59 mins = 137bpm, Highland Fling53(56!), duration 8 hours 33 minutes = 152bpm, London to Brighton Trail56, duration 7 hours 59 minutes = 154bpm.
Apart from noting that I tend to finish just under the next hour (a bit of psychology there!), with regards to the heart rate, the longer the race duration the lower the heart rate, but most significant is just how low my average heart rate is. With a current maximum heart rate of 187bpm, I am averaging between 73% - 82% of my maximum heart rate. I haven't actually got the data of my lactate profile laboratory test (the advantages of working within a sports science department!) here with me now, but I am pretty sure my lactate turnpoint (also known as onset of blood lactate accumulation OBLA, or maximal lactate steady state MLSS) occurs at a higher heart rate.
I have just remembered a graph of my lactate profile is provided on a University of Brighton news item from October 2008. If you follow this link www.brighton.ac.uk/chelsea/news/archive/2008/marathon.php you will see that my lactate threshold (when there is a first initial rise in blood lactate above the resting value) occurs at a heart rate of 165, and my lactate turnpoint (the second 'sudden and sustained' increase in blood lactate) occurs at a heart rate of 178! As I thought well above ultra racing average heart rates of 136 - 154bpm. At heart rates above this lactate turnpoint value, lactate will continue to increase with time until no longer able to continue. At lactate turnpoint, also known as maximal lactate steady state MLSS, the blood lactate level remains elevated above baseline values, but will remain relativley stable over time. Terminology used is based on Jones (2006).
I would also expect that my heart rate percentages during ultra runs are probably a little bit higher than other runners, so for most runners they are running at an intensity well below their lactate turnpoint. So whether your lactate turnpoint occurs at 75 or 85% of VO2 max is pretty irrelevant as you are nowhere near this intensity during ultra running. (Please note % HR does not equate to % VO2 max.)
What about one's actual VO2 max value. Yes, one does have to have a reasonable VO2 max value in order to perform in ultra runs, but how high is very debatable. However, just as with lactate turnpoint, because one is running at an intensity nowhere near VO2 max then, the actual VO2 max value becomes rather irrelevant.
This then leads to the third factor, RUNNING ECONOMY. As Lucia et al (2008) p172 states "... by comparison, running economy has been relatively ignored in the scientific literature, though it may be the critical factor determining endurance running performance." Great these researchers agree with me, this therefore must be one of the good quality scientific articles!
"Running economy (RE) can be defined as the O2 cost (in ml/kg/min) of running at a certain speed." Andy Jones, 2006, the physiologist to Paula Radcliffe since 1991, so therefore someone who talks sense! What you want as a runner is to be very economical, i.e use minimal oxygen when running at a particular pace, i.e. your typical ultra running pace, as it is this intensity that you are running at during an ultra race, not VO2 max or lactate turnpoint intensity. Hence the importance of running economy.
The question I hear you all asking is "what determines running economy?" Well there are loads of factors, and there is no clear consensus within the literature on what is most important. The factors are classified as physiological, anthropometric and biomechanical and include too many to type out, but the following image from Sauders et al, 2004 shows a few. 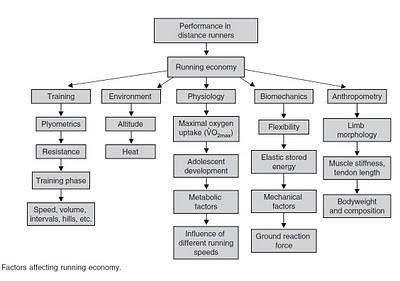 However what is the most interesting finding, is that " .... the years of training is significantly correlated (r = 0.62) with running economy in relatively well trained distance runners. The critically important factor in the enhancement of running economy may therefore be the cumulative distance the runner has covered over the years of training and not training volume per se." Midgley et al, 2007, p870. Hence my statement from by last post "It isn't so much the mileage that you have 'put in' over the preceding months, or even the preceding year or two, but it is the TOTAL MILEAGE you have run EVER that is important" is therefore supported by evidence!

So to Brian Mc, who left a comment on my last post (thanks), you are not alone in recognising that you are getting better as your years of endurance running increases. Andy Jones, remember the physiologist for Paula Radcliffe, concludes in a really interesting article written in 2006 that "it appears that enhanced exercise economy is central to the continued improvements in endurance exercise performance noted in elite athletes." p112, as he reports that between 1992 and 2003 Paula Radcliffe's running economy demonstrated a 15% improvement, whilst her VO2 max decreased .
I could go on and on and start explaining what various authors suggest are the mechanisms that lead to improved running economy as the cumulative distance run increases, but I think I have written enough for one post.
Within my posts, my aim is to be thought provoking, inspiring and encouraging. Many apologies with this post, as in some ways it hasn't really been encouraging, as to put it simply, it takes time, years in fact to improve running economy, so there's no 'quick fix'!
I will sign off with a comment from Kilian Jornet, double winner of the 166km Ultra Trail Mont Blanc, who climbed his first 3000 metre summit at the age of four. "... my school was in La Seu d'Urgell, 21 miles round trip. As a child there were days that I ran a marathon, 42km." http://tinyurl.com/czxksf Even at the age of 20, how many miles had he ran?
A parting thought: a day older, not only a day wiser, but an improved running economy!
Stuart
Posted by UltraStu at 20:34