Yes, back again, so soon, but tonight's post is quite timely, as in the UK this weekend there are the Brighton, Manchester, and Blackpool road marathons.  Then next weekend there is the London marathon and also the Jersey marathon.

My plan tonight is to simply introduce  a web page which has a marathon pacing calculator which may help many runners who are racing a road marathon in the next two weeks.

When it comes to running a road marathon, there are probably two things that cause the most discussion amongst marathon runners:  nutrition, and pacing.  Out of the 125 posts I have published on my UltraStu blog, by far the posts that have generated the most comments and discussion have been to do with race pacing.  From  my third ever post that introduced some of my ideas on pacing for ultra trail races it created a little bit of a stir.  But my road marathon pacing analysis based on the first 25,000 finishers at last year's London Marathon really created quite an animated response, with some readers feeling sorry for me in that I was so confused "Sorry Stu, this article shouts out that you don't understand how to go about analysing pacing strategies."  and other readers just simply coming to the point with "OMG, what utter BS", which I presume means "Oh My God! What Utter Bull Shit!"  Although maybe I am confused and it should have been interpreted as "Oh My God! What Utter Brilliance. Superb!

Well over the last four years of writing on UltraStu, I have learnt that even if many people disagree with my ideas, it doesn't actually mean that my ideas are wrong, as there are usually other people who agree with them, and most important, at the time of writing I obviously thought my ideas were good.  Now nearly a year later, re-reading my two blog posts on road marathon pacing strategy, (post I, and post II), I am still TOTALLY  convinced that what I wrote back then makes total sense.

It was therefore quite pleasing that when chatting to Tim, a follower of my blog, when he commented that he really liked my London marathon pacing analysis and that he also thought that it could be hugely beneficial to thousands of runners to help them achieve their marathon target time.  He then offered to turn my ideas from my blog post into a marathon pacing formula which would calculate mile split times for every one of the twenty six miles, to ensure that runners remained on target to achieve their target time, with the formula based on real life data from tens of thousands of runners.

Yes, I know that it is only a few days to this weekend's marathon, but I would expect even at this late stage, there will be thousands of runners just not sure what pace to start out at, in order to achieve their goal finish time.  I guess most marathon runners would have heard of the negative split, i.e. running the second half of the race slightly quicker than the first half of the race.  And many may like that idea, as it is frequently promoted as the best strategy within running magazines or on running podcasts.  Or perhaps if the negative split strategy seems a bit too ambitious, then many runners may favour the even split approach.  Where the runner maintains the same running pace throughout every one of the twenty six miles.

Now I won't repeat my views on this totally flawed idea, as you can read these within my two blog posts from May last year.  But it does still absolutely amaze me how seemingly clever people think that one should still be able to run at exactly the same running pace after 20 - 26 miles, as the pace they would run at when totally fresh, as if fatigue doesn't exist!  It seems so obvious, that the only way this even pacing can be achieved, is if the pace run at the start of the race is just far too easy.  It has to be so much slower than one is really capable of, to be able to allow for the fatiguing affects of running 20 - 26 miles to equally balance the amount of time the runner at the start of the race is deliberately going slower per mile.  To put it simple.  If runners didn't fatigue during a marathon race, then an even paced strategy would be the result.  But fatigue does occur during a marathon.  Ask pretty well every marathon runner.  Therefore to achieve an even paced strategy, one has to run the miles at the start of the race at the pace that they feel that they are able to achieve when they are near exhaustion at say around the 25 mile mark.  One has to deliberately slow themselves down at the start when not fatigued, just to ensure that they aren't running too quickly at the start, otherwise there would be no chance at all at running at anywhere near the same pace when near exhaustion 25 miles later!

Sorry if the above paragraph is a bit jumbled.  I just found it quite hard trying to explain something which seems just so obvious that it shouldn't really need explaining!  Anyway, I did say that this post was going to be short, so lets finally go to the marathon formula calculator, available on the following website: 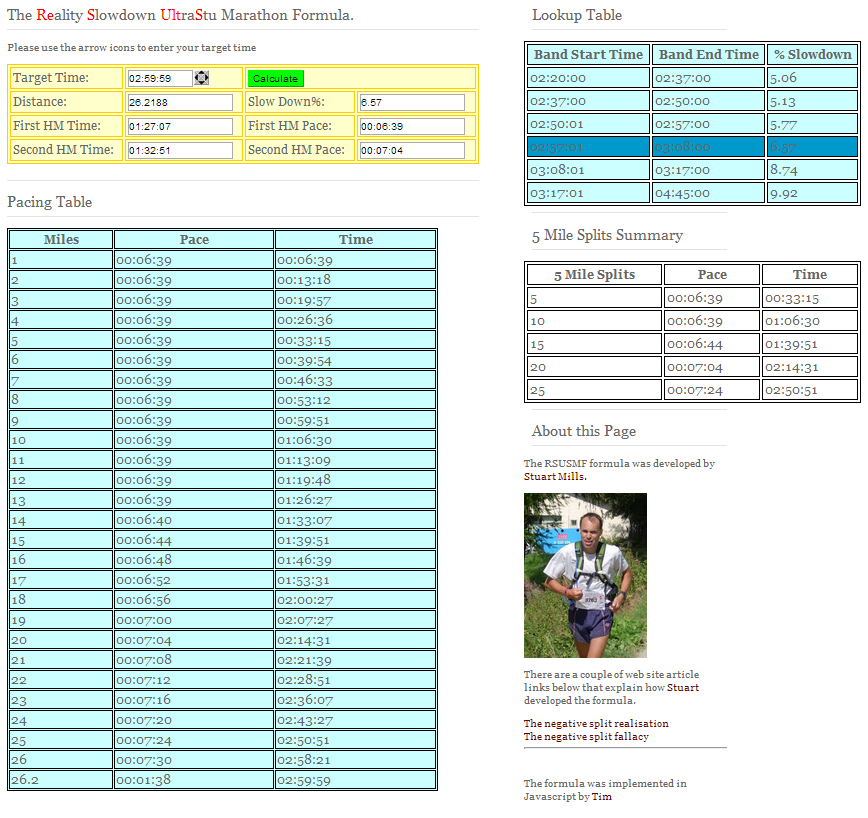 The web page calculator is titled the ReSUltS Marathon Formula.  Yes, implementing the pacing strategy that the formula calculates, runners are MUCH, MUCH more likely to achieve the result they want, i.e. their target marathon time.  Adopting the even split, or even worse the negative split pacing strategy, then as the data from last year's London Marathon demonstrates, runners are therefore 96% likely to FAIL!  Yes, I will repeat it in words, just to make it that much clearer.  Adopting the even split pacing strategy, has a NINETY SIX PERCENT chance of FAILING.

To those of you running a road marathon in the next two weeks,  I strongly ask you to consider is it wise to follow a strategy with only a 4%, yes ONLY a FOUR PERCENT chance of succeeding.  Weigh up the odds.  Look at the data. Fatigue does occur!  Slowing down during a marathon IS A REALITY, due to the gradually developing fatigue as the race progresses, especially during the final third of the race.  Talk to any marathon runner, that is when the marathon starts really getting challenging.  But somehow, one isn't meant to slow down, even when massively fatigued!  Is that reality?  No not for 96% of the runners!

The  ReSUltS Marathon Formula. therefore gives the marathon runner clear guidance on how much one should expect to slow down as the runner fatigues during a road marathon.  The amount of slowdown isn't a guess, nor a dream (i.e. not slowing down), but based on the data of over 10,000 runners, with the amount of slowdown being dependent upon the runner's target marathon finish time.  Just use the arrows at the top of the web page to enter your target marathon time, and with one click, your pacing strategy is calculated.  As simple as that!  All the guess work removed.

No doubt there will be many people who will still think that I write "Utter Bull Shit".  But everyone is entitled to their views.  However, I find it so disappointing, that over the next two weeks, so many marathon runners  will not achieve their target marathon time.  Not because they were not capable of achieving their goal time, but for many, simply because they followed an unrealistic pacing strategy and simply ran the first half of the marathon too slow, i.e. running at a pace slower than they could have actually ran at.  Hopefully the ReSUltS Marathon Formula calculator will help increase the number of marathon runners achieving their goal time.

If you know some runners that are running a marathon in the next two weeks, then forward them the link to the ReSUltS Marathon Formula web page, http://rsusmf.appspot.com especially if they are thinking that they can achieve an even split marathon, whilst at the same time, running a marathon time that truly represents what they are capable of achieving.

I will sign off with a quote that perhaps helps illustrate the logic some people apply in justifying that the even paced split is obviously the correct pacing strategy.

"No offense to hundreds of thousands of runners, but quite frankly I don't care that 95% of them run positive splits. The real question should be could they have run a faster time if they would have run more even splits? And again, who cares if it was even a PR - could that PR have been a better PR?"


All the best to all the runners running a marathon in the next two weeks, especially those at Brighton.  I will be cheering you on loudly on Sunday morning, hopefully in the usual Brighton marathon sunshine.

Stuart
Posted by UltraStu at 23:55