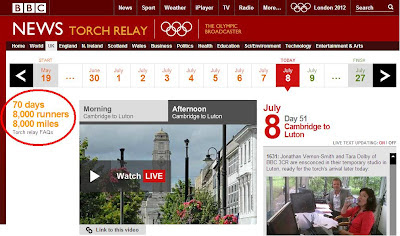 When you go to the Official Olympic Torch Relay website the same illusion is being portrayed .  Today it states "The Flame will travel 107.66 miles through 12 communities before arriving at Popes Meadow Park in Luton for the evening celebration. A total of 131 Torchbearers will carry the Flame through the day."  So when I discovered that in fact the torch travels more than 6000 of the 8000 miles in a car, I was rather disappointed!

Fortunately, Endurancelife, the people that organise some awesome endurance events, also felt the same disappointment and decided to take up the challenge and set in place the Real Relay!  The Real Relay website describes what the Real Relay involves:


The Endurancelife Real Relay is an exciting attempt to follow the entire route of the official Olympic Torch around the British Isles in one continuous non-stop journey, running every step of the way.  Starting out from Land’s End at midnight on Monday 28 May, ten days behind the official Olympic Torch, the Real Relay will involve hundreds of runners from across the British Isles running through the day and night on an 8000 mile mission to reach London in time for the Olympic Games opening ceremony. We’re calling on runners from all over the British Isles to join the relay by signing up to run one or more of the stages (below) and help achieve one of the greatest Olympic endeavours of all time.

So as you would imagine, the task Endurancelife set to the running community of the UK was a very demanding challenge.  Well with the Real Relay now into day 40, the runners of the UK have carried the Real Relay baton non stop, 24 hours a day, covering close to 5000 miles.  Tonight the 500th leg, each leg is on average 10 miles, will be completed.  At times the Real Relay has got behind schedule, for example due to floods, or simply due to some rather demanding legs, such as reaching the summits of Ben Nevis, Snowdon, and Scaffel Pike, but at the moment it is bang on schedule.  The progress of the Real Relay can be tracked online on the Real Relay website.

To date the schedule of the Real Relay has been set at typically ten minutes per mile.  However, in order to overtake the Olympic Torch Relay at Dover, the schedule has been slightly quickened.  I have therefore been allocated 1 hour 40 minutes to cover the 12 miles, which works out at exactly 8 minutes 30 seconds per mile.  A bit quicker, although hopefully should be a reasonably comfortable pace, although I have seen some reports that the baton is reasonably heavy due to the inclusion of the gps tracking device.

I would like to share this great occasion. so send an open invite to any runners out there who would like to run the Real Relay leg 613 with me, and help with the carrying of the baton.  If you would like to run the leg, simply send me an e-mail franstu@talktalk.net or leave a message on Facebook . Along with being a great opportunity to strengthen the unity of the UK running community, it is also a good opportunity to raise money for the charity CHICKS.  All Real Relay runners are encouraged to donate a minimum of £10 to this worthy charity. To date over £7000 has been raised from the Real Relay.

I look forward to receiving contact from many runners out there.  The more runners the better.

Stuart
Posted by UltraStu at 17:46