Video of Lakeland 100 - A Demonstration of High Self Expectations

A bit of a 'detour' from my planned Self Expectation Part 2, however, I am continuing the 'Self Expectation' theme as I expand upon the Lakeland 100 video clip.

On Sunday afternoon, as it was pouring down outside, I was getting a few odd jobs done. One of them was to convert our family videos from miniDV tape to DVD.  So for the first time I viewed the video footage my wife Frances took of me racing the Lakeland 100 race back in July. 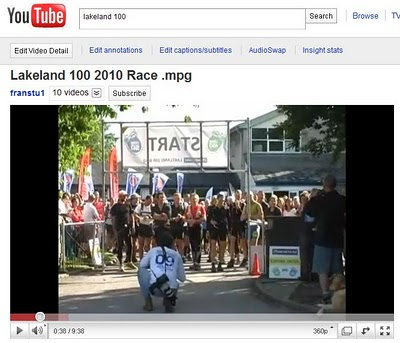 The post titled "Lakeland 100 - The Importance of Preparation - Developing Positivity and Self Belief" went into some detail regarding my preparation for the Lakeland 100.  Watching the video the other day, simply confirmed to me just how successful my preparation was in terms of developing self belief and subsequently high self expectations.

During my preparations, having given some serious thought to 'what causes fatigue during ultra running?', I had total self belief that the pace one starts at, (within certain limits, obviously one can't start at 5 km race pace), will not affect the level of fatigue later on during the race.  I know this view is quite different to many other ultra runners, however, I had total belief in my theory.  Due to this total belief, I was then able to formulate a race strategy, where no matter who was on the start line of the Lakeland 100, I was going to start the race, at whatever pace was necessary, in order to be in the front.  For how long I would maintain this fast pace for I hadn't really focused on, but the intention was for at least the first hour or two!  Coming into the race my self expectations were that pretty well without doubt I would be leading at Checkpoint One.  Now these are pretty high self expectations, bearing in mind I had no idea on the capabilities of the other runners in the field.  But with this self belief, that starting fast will do me 'no harm', these high self expectations were totally realistic, as was demonstrated on race day.

If you watch the video you can see my fast start intentions within the first few metres, and then at around the 2.5 mile mark as I approach the carpark at the start of Walnar Scar Road leading the field.

The advantage of the fast start in the Lakeland 100 is that it then creates 'loads' of positive energy.  It helps to build tremendous confidence during the race, in that my preparation has been effective, i.e. the expectation of leading into checkpoint one has been confirmed, therefore, I can expect positive results for the remainder of the race.

As I mentioned in my race report post, how long would I stayed at the front of the field was unknown.  What I did know as I was leading the race, was that the onus was on the other runners to catch me.  What were my self expectations?  Did I expect them to catch me?  Thinking back to race day, which watching the video has aided in terms of the 'crispness' of my memory.  As I had to slow my pace down to a more realistic pace for a 100 mile race at around checkpoint 2 near Boot, I honestly felt that they would catch me, as it felt as if I was having to slow my pace down quite significantly.  However, I never let these distant thoughts get near the forefront of my mind.  It is only now as I deeply reflect, that I appreciate that there was this negative expectation, all be it deeply 'buried'!

My main focus of my preparation in terms of developing positivity, self belief, high self expectations, was not focused on my finishing place, but more on my finishing time.  Having recced the entire course (apart from part of leg 10 - see post titled "Lakeland 100 (UTLD) Course Recce - My Mini Adventure!" for details), I was able to set expected times to complete each leg.  Only problem, come race day, the conditions underfoot were very wet and soggy, which therefore made my target times unachievable.

Chris Carver left some interesting 'words of wisdom' in his comment he left on my previous post:


"To avoid these situations arising I try to formulate coping strategies, in the months before a race, so that should anything untoward occur I know exactly how to deal with it."

In hindsight, this approach of his has some merit, as I hadn't considered how to deal with my target time no longer being realistic due to the conditions.  I guess I don't pay any attention to formulating coping strategies in case something goes wrong during the race, as to me, thinking about what could go wrong seems to be encouraging negative thoughts.  My whole approach in my preparation is to develop positivity, NOT negativity!  I'm not sure how to resolve this issue, as I do see the wisdom in planning for things that could go wrong.  For me during the Lakeland 100, I didn't have an alternative approach.  When my leg split times were no longer relevant, the focus then became simply to run as quick as I could feeling comfortable.  Only problem with this was, come later in the race, actually during leg 9!, due to the soreness in my quads, nothing really felt that comfortable, so what then became my focus?

Thinking back now, I can't really recall what did become my main focus from leg 10 onwards.  One thing for sure was that my pace slowed quite significantly!  Apart from a rather negative leg 10, legs 11 - 14 seem to simply fly by.  One often reads about sportspeople being 'in the zone' whatever that means.  Looking at the video clips of me near Elterwater, near the end of leg 13, and during leg 14, I was definitely in some form of zone.  A few days after the race, Frances asked me "Do I enjoy having her and our boys cheering me on?"  Of which I reply an absolutely positive YES.  She then asked, "Then why is it that you totally ignore us as if we don't exist!"  I was not aware that this was the situation, this is what I did.  But looking at the video clips, I do pretty well totally ignore them, apart from during leg 1!

Although it makes is less satisfying for my supporters, I see this deep focus I exhibit as one of my strengths.  During the last 5 legs of the race, although my legs were rather sore, deep down I didn't feel as though I was really fatiguing!  I had total self belief in my preparation and my ability, and my high self expectations that running 100 miles around the Lakes District was 'going to be a breeze'.  This helped keep any self-doubt regarding my ability to finish completely 'at bay'!

Watching the video clips of my running during the later stages of the event, I can now see why Frances doesn't really enjoy watching me race ultra races, as it really does look like I am suffering quite a bit.  The amazing thing is that, even as I watch the video, I know that it looks 'heaps' worse than it was.  In fact right up until the last leg, ignoring a bit of negativity on leg 10, I was pretty positive and believe or not, enjoying the overall experience quite a bit!

Come the last leg, things do begin to go a bit 'astray'.  This is something I need to work on.  As I get near the end, the negativity begins, as I think about finishing, think about the massive distance I have run.  All of a sudden it is as if the mind is saying you should be exhausted by now, so instantly, I become exhausted!

As I have become to realise, my performance in Ultra Running, especially these long races, is pretty well entirely determine by my self expectations.  "Expect to run fast, I do!  Expect to be tired, I am!"

All the best as you develop your positive high self expectations.

Stuart
Posted by UltraStu at 22:04